Some people think I am a jack of all trades on matters farming because I grow various crops, keep fish, goats and rabbits on my eight acre farm in Mwea. The farm is located between rice paddocks, but I wanted to be different, the reason why I do not grow the crop.

Let me begin with what I love most — fish.

I have 30 fish ponds and eight recirculation aquaculture systems, which I use to hatch catfish and tilapia fingerlings in my farm called Mwea Aquafish Farm. I produce 50,000 mono-sex tilapia and 30,000 catfish fingerlings monthly. I have been keeping fish for about five years, but my interaction with them started sometime back when I was working in Nairobi as a fisheries officer for the government from 1980s to early 90s. My job entailed working with farmers in Central and Nairobi to encourage them to adopt fish farming.

I must confess it was an uphill task, especially in Central, where farmers were used to rice and coffee. I was later posted, alongside other persons, to Moi University to set up the Fisheries Department since I had trained in Bio-Chemistry and worked in the ministry. At the university, my work involved training extension officers, students and even farmers. During this time, I also furthered my education where I studied Masters degree in Aquaculture at Port Harcourt University in Nigeria and then did my PhD in Fish Biology and Watershed Management in Canada.

I returned to the country and continued teaching at the university, where I later became a professor. The challenge, however, was that there were no enough ponds for practical lessons. I tried my best to better the situation. I wrote proposals in search of funding and luckily, USAid funded us through the Aquaculture Collaborative Research Support Programme (ACRSP) to the tune of Sh10 million for construction of ponds. We were now able to do our practicals with ease.

But things took a nasty turn in 2007 after the elections when violence erupted. My house was razed in the violence. I had not foreseen such a situation. It was not easy to wake up, pack my things and leave a place I had known as home for more than 10 years.

I returned to Mwea and took a sabbatical, but after selling my burnt house in Eldoret for Sh2.9 million, which was basically the price of the land. I used the money to buy the eight acres where I established my fish ponds, an idea which came from one of my Masters degree students who eventually became my farm manager. I began with six ponds. I got my first 10,000 tilapia at Sh50,000 from a hatchery in Siaya County, which I transported in the wee hours one day in March 2009.

Six months after I set up my fish farm, the government rolled out the Economic Stimulus Package. This is what gave me a boost. The government, through District Agricultural Officers, approached individual farmers to help produce the 48 million fingerlings that were needed to stock 48,000 ponds across the country.

The business was lucrative. I used my fish to breed fingerlings, which I sold to the government from 2010 to 2013 at Sh5 each. We were producing over 100,000 fingerlings on order. I used the returns from the business and loans to construct 24 more ponds, classes, a farm house and buy pumps for my first hatchery, among other things. I now have eight hatcheries, but I have not finished installing some of the equipment.

On my farm, I also keep ornamental fish like the Shubukin, Yellow and Red Comets, but I do not sell them. I sell each tilapia and catfish fingerlings at Sh5 to Sh10. A kilo of mature tilapia, on the other hand, goes for Sh400. I sell the fingerlings to farmers and tilapia to hotels in Nyeri. I do not have mature catfish currently, but I also sell them to hotels.
Farmers place orders a day before to allow for the preparation. 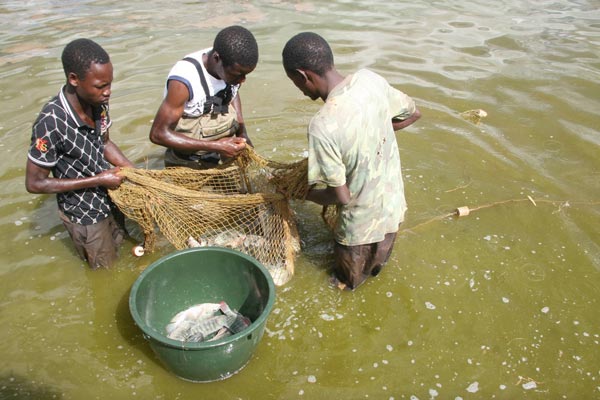 We need 24 hours to leave fingerlings unfed so that they do not excrete ammonia during transportation, which depletes oxygen. When packing, we pump oxygen in the bags, then add a pinch of salt in the water to make it saline, which stabilises fish to lower its metabolic rate and excretion of ammonia.

If you excite fish during transportation, 90 per cent will die before reaching the destination. I normally use water from the ponds to irrigate my tomatoes, bananas, sukuma wiki (collard green), cabbages and cassava, among other crops, because it is full of nutrients.

We produce 80 to 100kg of vegetables every day, which we sell at Sh10 per kilo to traders in Mwea. Mine is a model farm where students come for four months attachment. Farmers also come and learn various practices at Sh300 each.

Students who come from neighbouring countries pay Sh1,000 for attachment while we pay Sh4,000 a month to those from our universities and colleges.

We offer the two groups accommodation. This project is supported by ACRSP.

With as little as Sh100,000, you can put up a standard pond and stock it. Those in warm areas do not even need greenhouses.

They can naturally grow their crops using manure, as long as they regulate the use of chemical fertilisers. Some of the challenges I face as a fish farmer is lack of reliable market. Sometimes the prices are too low and the cost of fish feeds is too high.

For a farmer who is starting, it is very important to know where you will sell your produce first. In my 57 years, about 20 which I have spent in farming, I have learned that you cannot not reap overnight. I took about three years to earn profit.

This is the message I tell my two children, who are adults. I now plan to return to teaching in January next year.

- As told to Elizabeth Merab